In the spring of the 2019, the historic Banquet Hall at the Daughters of the American Revolution Constitution Center in Washington, D.C., desperately needed renovation to remain a useful and valuable event space. In addition to being the organization’s headquarters, it also serves as a lucrative concert and show venue that has played host to world leaders at the G7 Summit, famous entertainers, as well as a staging area and movie backdrop for films shot in D.C. As a vital source of event income for DAR, this space is extremely important to maintain. It was crucial this campaign succeeded. 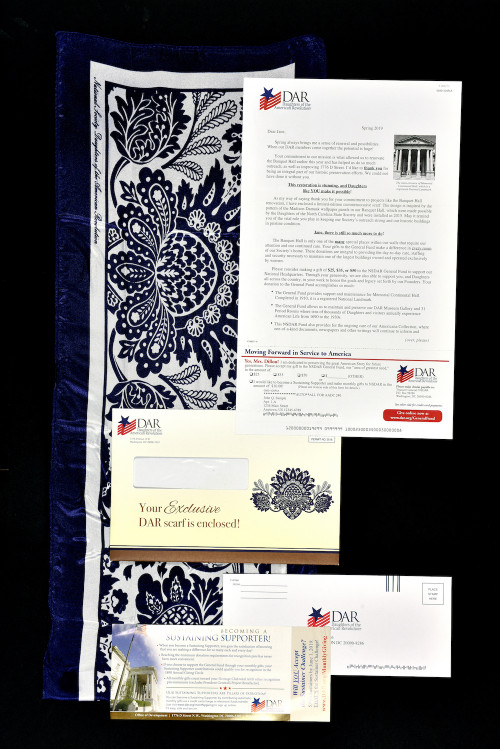 Since most members do not have the opportunity to travel to Washington to visit the DAR complex, an appeal that helped connect the Daughters (donors) to this campaign on a personal level was created. One of the standout features of the Banquet Hall is the gorgeous damask wallpaper. The DAR chose to feature this wallpaper pattern on a limited-edition scarf as an upfront premium to a select group of donors along with a personalized letter, reply and reply envelope. The messaging in the letter thanked the Daughters for their commitment to the DAR mission of historic preservation and asked for their help in supporting the Banquet Hall renovation. The scarf was a tangible reminder of their participation in this campaign and project.

The results were truly impressive and outperformed projections at every metric! The campaign generated a 19.76% response rate — 32.89% higher than budget. And even though the scarf, as you can imagine, increased the cost dramatically, the campaign generated over $235,000 in net revenues. Beyond the numbers, the Daughters were truly delighted with the scarves. The member-only Facebook groups buzzed about the scarves and a photo of all the monthly sustainers wearing their scarves was taken during the DAR Annual convention.

A GOLD MAXI Award was presented to Edge Direct on November 5, 2020 during A Night at the MAXIs — the first-ever Virtual MAXI Awards
Ceremony.