Fundraising success depends on two things: Innovation and one-of-a-kind human connection. By maintaining a balance of these two things, you will continue to engage the donor, have a great relationship with the donor and will keep the donor interested in your organization (which means they will keep coming back).

It seems as though there is something new popping up on the daily, so it can be difficult to keep up with everything. But it can be as simple as just thinking about donors’ daily lives—their lifestyle, their hobbies, their interests.

That’s what one fundraiser did—in the name of designer fashion.

Women love to shop. As a woman myself, I am at my happiest when I am shopping. Why? It can be therapeutic, and new clothes make me feel good about myself. Like the saying goes, “You feel good when you look good.”

So, here’s the idea: A donor has an excessive amount of clothes. She can sell it online on websites such as eBay, Poshmark, Tradesy, Material World and the list goes on, and maybe get the half the price she paid for—seems like waste doesn’t it? But what if there was a way for her to sell her clothes online and donate the proceeds to the charity of her choosing?

Ta-da! In comes Union & Fifth, the only nonprofit designer consignment shop to date. Union & Fifth partners with charities by giving them everything they need to launch a campaign and giving them the unique opportunity to engage with their donors in a new way.

When an engaged donor is interested in making a donation to the charity of their choice, all they have to do is click the “donate” button on the Union & Fifth website, fill out the necessary information and are sent a kit, which includes a UPS shipping label. Then, the donor will “clean out their closet,” put everything in a package and ship it back out to Union & Fifth. The organization will then take care of the rest—pricing, measuring, taking pictures and posting the items onto the website. Once the item is sold, 75 percent of the proceeds go to the charity that the donor chose.

Charities receive a list of donor names when they receive a donation check from Union & Fifth. Additionally, Union & Fifth does the receipting, so all that is left for charities to do is write thank-you notes.

“To-date, we have cut checks to over 200 charities. Our record closet raised $63,000 from one closet, so we know that it works,” Christena Reinhard, president and founder of Union & Fifth, said in an interview with NonProfit PRO. “We're having an amazing time fundraising for some incredible organizations.”

Reinhard and her sister-in-law created Union & Fifth in 2014 because they understood that there were women out there who had clothes in their closets that they weren’t wearing, and she knew that they could turn those unworn clothes into unrestricted funding for charities.

With over 120,000 shoppers and donors who are actively on the Union & Fifth website, they continue to have a growing number of charities that want to partner up with them. These partnering charities are featured on the website, have an impact video created for them and receive support from Union & Fifth on their campaign. 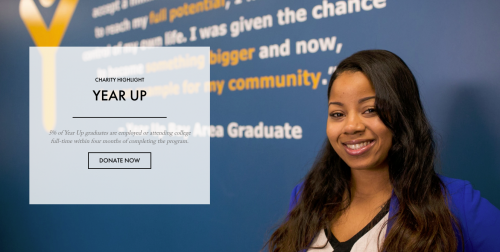 Furthermore, Union & Fifth offers charities the opportunity to host “Parties for a Purpose,” where women gather, bring clothes from their closets and learn about Union & Fifth and the charity partner. These parties have about a 90 percent participation rate, according to Reinhard.

While Union & Fifth is only three years old this year, the organization has had tremendous feedback from its community—growing charity partners and celebrity engagement, as well recognition from major gift officers and charities that understand the value of connecting with donors in a unique and new way.

“It is imperative for charities to raise innovation, and we think that we present a unique, innovation and opportunity to engage women, which we know is a crucial demographic,” Reinhard said.

Communicating With Major Donors During These Times

Donors Are Researching Nonprofits Before They Give