Look, there are some headlines you just hope you never have to write, but because we have now seen unspeakable terror, we felt we had no choice. It's like a horror movie where the only way to free yourself from the curse is to pass it to another person. We're sorry.

But anyway, here it is, a bust of Donald Trump made from 30 gallons of dryer lint (via Cleveland Patch): 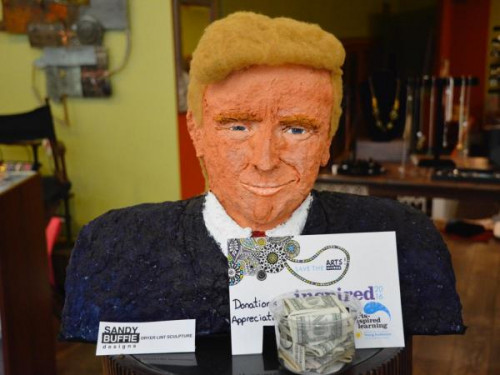 It's ... well, it's actually pretty darn good. The hair is a little more Conan O'Brien than Donald Trump, but considering the medium we're willing to give it a pass. Maybe it's because it's so good that it's so terrifying. Those bushy brows, that smirk, those squinty eyes—dead on.

Dryer Lint Don here is the work of Cleveland artist Sandy Buffie, who makes some seriously cool stuff. (Check out these necklaces made from repurposed Keurig cups, those ecological nightmares that even their creator despises.) According to Cleveland Patch, Buffie spent three months working on the lint sculpture and debuted it in her Cleveland shop for the Republican National Convention.

Apparently, it was quite the attraction. Via The Boston Globe:

“Hundreds of people have stopped in,” said Buffie, whose studio and showroom, Sandy Buffie Designs, is located inside the Fifth Street Arcades, just steps from the convention.

“People have just been coming in and taking pictures all morning,” she said.

It probably helped that Buffie placed a welcome sign outside her shop inviting visitors to get up close and personal with the lint lookalike.

So, what do you do with a life-size bust of the Republican presidential nominee constructed entirely from dryer lint and glue once the national convention is over? You auction it for charity, duh.

Buffie said she will sell the piece to the highest bidder, with proceeds going to Center for Arts-Inspired Learning, a Cleveland charity that unites arts and education to promote creative learning for children. As of mid-July, the high bid stood at $1,000.

4 Essential Checklists for Every Event Planner

Auction Inspiration: 101 Ideas on How to Get Great Items for Your Charity Auction

10 Secrets for a Successful Auction