Charity Defense Council, the nonprofit-advocacy organization founded by Dan Pallotta, on Thursday issued an 11-page media advisory detailing the preliminary findings of its investigation into the allegations CBS News and The New York Times made against Wounded Warrior Project.

The organization, which promised a more detailed report forthcoming, found "major errors" in the two news outlets' reporting, including "significant factual errors" and "the possibility of material bias." It also listed 12 points of contention with the investigations.

Chief among these is that neither investigation included revenue comparisons in its allegations of overspending. We covered this in our original report on the CBS News investigation in February, where we wrote:

The report correctly notes that Wounded Warrior Project spends 60 percent of its budget on vets, compared to 96 percent for Disabled American Veterans Charitable Service Trust and 91 percent for Fisher House—a significant difference at face value. But convert those percentages to dollar figures and they tell a different story:

In other words, Wounded Warrior Project spends three times more on veterans than those two organizations combined. Even if you factor out all other program expenses, Wounded Warrior Project still provided $42 million in grants and assistance to organizations and individuals in 2014, more than either Disabled American Veterans Charitable Service Trust or Fisher House spent on total program expenses.

Charity Defense Council broke down the numbers even further, providing a pair of charts detailing the fundraising ratios for each of the other veterans charities the news outlets compared against Wounded Warrior Project. One of the charts, below, shows how the numbers for Disabled American Veterans Charitable Service Trust, Semper Fi and Fisher House stack up: 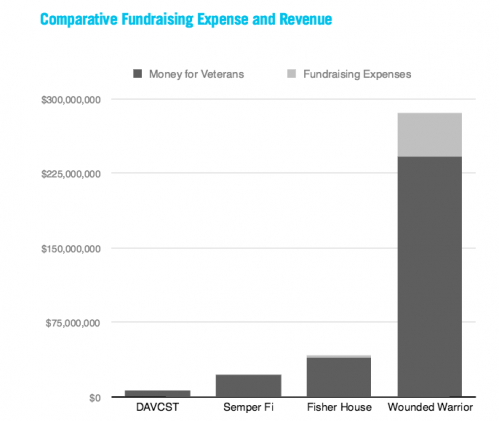 The report takes issue with several other aspects of the CBS News and The New York Times investigations. It claims that neither story "contained any evidence of systemic program ineffectiveness or lack of program performance," and that reports of program problems in the stories were based only on anecdotal evidence obtained from terminated employees. Charity Defense Council also claimed that both investigations showed possible material bias, as neither included commentary from current Wounded Warrior Project employees.

But perhaps the most interesting detail in the report is this chart:

Charity Defense Council argues that CBS News and The New York Times presented Wounded Warrior Project CEO Steve Nardizzi's salary out of context, focusing only on the dollar amount and not the ratio of dollar paid to dollar generated (or impact generated). The chart shows these ratios for the charities referenced in the investigations, including the ratio for CharityWatch, one of the watchdogs the news outlets relied upon for information. It's a direct shot at the watchdog organizations, with whom Pallotta and Charity Defense Council have historically been at odds.

The report largely backs Wounded Warrior Project, as expected, but does note (as we did) that the number of former employees lining up to criticize the veterans charity is troubling.

"Culture is important. Resentment and hostility bred by poor communication or administration of employees can lead to acts of retaliation of the sort that may explain the dynamic behind the commentary former employees have provided to the press," the report reads. "This issue warrants further investigation. Charity Defense Council will focus on this issue in its final report."

Whatever your opinion of either organization, the full report is worth a read. View it here.

How Well Do You Really Know Your Donors’ Emotions?