Since the 1960s, the Association of Fundraising Professionals has supported charities and advocated global change. Within its community, the organization offers its members the opportunity to participate in different groups, such as Collegiate Chapters and Youth in Philanthropy in support of youth in fundraising and the AFP GLBT Page and the AFP African American Page in support of diversity within fundraising. While the AFP has claimed to be an organization that advocates for “ethical and effective fundraising,” they recently have been under fire for not supporting women’s rights.

On Feb. 22, the AFP published an article titled “Why Are There So Few Male Fundraisers?” I’m sure many of you can see the problem from simply reading the headline, but let’s dive in a little deeper. The article discusses the high ratio of women to men in the nonprofit sector. More specifically, the organization reported that “the fundraising profession has been a female-dominated profession” and the approximate breakdown of its members have consistently been 75 percent female and 25 percent male.

They then followed up with, “Why are there so many more women in the profession? Should we be worried there aren’t more men, and is there anything the profession can do to change that ratio?”

In a world where women are still fighting for equal rights, the high number of women versus men should be a celebration—not a question of how we can lower the ratio of women to men. While there are more women than men in this profession, the organization pointed out that there is a significant gender gap in terms of salary—$20,000 to $25,000 to be exact—according to AFP’s Compensation and Benefits Study.

But just as an FYI, the AFP did put a disclaimer at the beginning of the article:

“This article discusses gender behavior and thinking in a general way. It is not in any way trying to imply that all men or women act or behave in a certain way. Every person AFP interviewed for this article was quick to stress that their comments were being offered in an open, informational manner designed to elicit further conversation and opinion and not meant to pigeonhole or stereotype members of either gender.” — AFP

What's worse? The AFP sent out their e-Wire on Mar. 8—better known as International Women’s Day—with the article as their top story. This sparked outrage on Twitter by many individuals throughout the nonprofit sector.

Vanessa Chase Lockshin, president of The Storytelling Non-Profit, co-founder of Stewardship School and board chair of Women Against Violence Against Women, wrote an article titled “Fundraising is Female: Thoughts on #AFPIWDfail” where she pointed out not only the issues with the article itself, but the article and the fact that it was top story on AFP’s e-Wire on Women’s Day.

Here are her five major issues with the article:

“What AFP did on International Women’s Day is certainly not the first kind of indiscretion that they’ve had as an association. In fact, it’s a series of indiscretions that really shows their true colors, which is why this was the tipping point for me personally. They have little accountability to their membership, a political analysis that is clearly lacking and few meaningful actions that support the philosophies they espouse.” — Lockshin

Lockshin wasn’t the only one to voice her opinion. Fundraiser Beth Ann Locke notes that while the article claims to ask the question, “Does the fundraising profession need more men?” the article does not attempt to answer that question.

“The way this article is written feeds into some issues of power and privilege without addressing them—the same issues that some that our nonprofits are fighting against! The article also approaches gender as binary—and let’s all get woke it just ain’t so any more—no matter your personal views. If you are a fundraiser, I believe you had better be approaching your work and life with an open mind and non-judgmental heart.” — Locke

A lot people had a lot to say about the AFP’s actions, most of which were criticizing the organization for its gender bias and not supporting women’s equal rights. The AFP spoke up and released a statement regarding the article and the e-Wire, where Jason Lee, interim president and CEO of the AFP, apologized on behalf of the organization for the error of their e-Wire on Women’s Day. 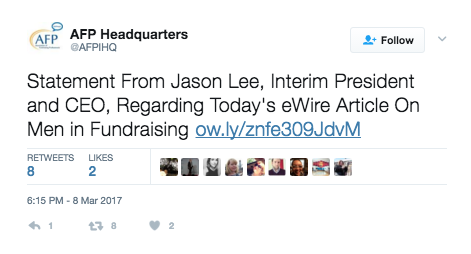 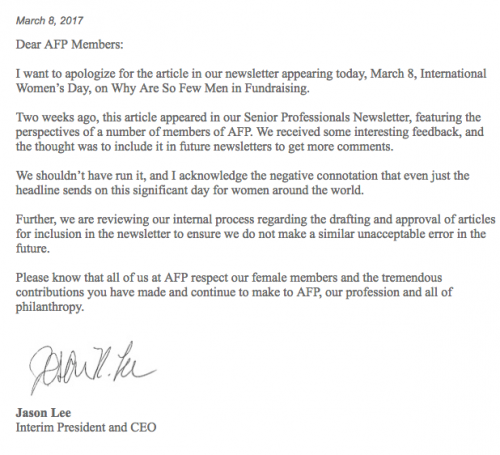 Our team here at NonProfit PRO respects the AFP for their dedication to the nonprofit sector and their support of fundraisers over the last 50 plus years. While we do believe that article was intended as an opinion piece to encourage discussion and that the organization did not intend for the article to be the top story on their e-Wire on Women’s Day—because we enthusiastically advocate women’s rights—this mistake is not one to dismiss so effortlessly. The AFP took a step in the right direction with their apology, and we hope to see more positive content from them on the topic of women’s rights in the future.