6 Ways to Prepare Your Nonprofit for a Potential Budget Impasse 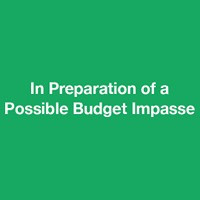 Some nonprofits had to endure weeks or months—10 months and counting for Illinois—without a budget this fiscal year. With budget impasses becoming more common, what can you do to prepare if or when one affects your state and your nonprofit?

Don Goughler, who retired two years ago from his role as CEO for the Family Services of Western Pennsylvania, now consults with western Pennsylvania nonprofits as executive in residence for The Forbes Funds. With about four decades of nonprofit experience on which to reflect, he shared six ways to start readying your nonprofit for a budget impasse right now.

When you’re not sure when your next payment from the state is coming, having as much cash on hand to maintain operations is key. You also have to consider that your funding could be lowered during budget negotiations, so delaying expenses, like capital purchases, that aren’t critical at the moment can keep your nonprofit above water a little longer.

"Let’s say, for instance, you plan to renovate your IT system, you plan to expand and maybe lease new property, that type of thing," Goughler said. "So, it’s not just paper clips. It’s the larger purchases that can make a significant dent in the budget of an organization."

2. Consult with your bank to update your line of credit.

A line of credit ensures cash flow. Whether your nonprofit is awaiting reimbursement for services or that big grant it just was awarded, a line of credit helps to eliminate cash-flow problems.

But telling the bank that the state owes you a given amount of money won’t make it budge. State funds can fluctuate, and banks typically aren’t willing to risk that. Instead, equity plays a large role in whether you’ll be successful in getting the bank to increase your line of credit.

"If you have a very small nonprofit, less than $1 million budget for instance, and your equity—even if it’s 10 percent, that’s only $100,000—so a bank is not going to want to loan money to you that would be jeopardized by your lack of potential to pay it back," he said. "So, that sort of thing happens. So, if you’re a $50 million organization, they’re a little less hesitant because in order to have survived to be that large, you’re likely to have substantial equity."

And you don’t have to wait for a potential budget impasse to check with your bank about your line of credit. In fact, you shouldn’t wait.

"You should always update your line of credit as your revenue increases because, as that happens, you’re likely to become eligible for higher lines of credit, so you should always keep it updated," he said.

3. Consult with funders to ascertain potential for receiving cash advances.

If your nonprofit receives funding from regional nonprofits or other organizations that dispense funding in smaller increments over the course of the year as opposed to reimbursements, it’s possible they might be able to offer advances on those grants.

"If they dispense their money in grants, that means they made a decision that they will grant you X number of dollars for a period of time, and they usually disperse that one month at a time," Goughler said. "That kind of money can be advanced. If, on the other hand, you have a contract that says, 'We will pay you $100 for each counseling session you provide' up to a certain amount, there’s a chance that you will never provide enough counseling sessions for the [organization] to recoup on their advance, so that’s the issue."

4. Delay expansion plans until after the budget is passed.

Expansion plans are costly, so before making concrete plans, check to see if the construction timeline will overlap with the months leading up to the new fiscal year, since the passage of a state’s budget can be unpredictable. However, expansion isn’t limited to just structures.

"Delaying expansion plans would have to do with things like, as an example, say you’ve proposed to develop a new program or expand a program—and that could involve hiring additional people, it could involve expanding your facilities or acquiring different facilities, it could be investing in technology, those kinds of things," Goughler said.

It may be more difficult if a big project is already underway, but it’s always best to be cautious if there is any anticipation of a budget impasse.

"If you’re in the middle of constructing something, for instance, you really can’t just sort of let it stop, in most cases—although sometimes you can’t if you’re doing an interior renovation or something like that—you could tell them, 'Let’s hold off. Let’s freeze it right here.' If you have committed to hiring somebody, you have to make a decision. If they haven’t started yet, do you tell them, 'Hey, it’s delayed' or if you’ve hired them and they’ve started, you may have to decide to lay them off.'

Don’t institute a complete hiring freeze, though. You will have to analyze the vacant position to determine whether it should be filled or not.

Also, make sure that you still meet all requirements for any contracts you have. For any positions that you decide not to fill, you can reallocate that money to fund a service or other area that typically relies on state funding.

"So if you don’t have a department manager, and they make $5,000 a month, for instance, or they cost you $5,000 a month, and you hold that position open for a month, then you have $5,000, theoretically anyway, that you can use to pay for other things," Goughler said.

6. Call your legislators to let them know the critical need for timely passage of the budget.

Just like you would contact your legislators to increase funding for your cause, you should ask them to pass a budget so your cause is not hurt by a budget impasse.

"It’s a matter of staying on the legislators. It’s a matter of showing them why this is a critical issue and what the impacts are using data," Goughler said. "It’s not just a matter of pleading. There are some real strong data-based reasons why these impasses are horrible."

Goughler suggested educating legislators constantly. One piece of valuable data he offered is that about 10 percent of employment is in the nonprofit sector and at least another 10 percent of the workforce is in the government sector.

"So when you stop the funding flow, and it affects those two sectors, you’re really dealing with 20 percent of the workforce," he said. "The legislators don’t always realize that, so you need to keep them educated all the time."

While keeping in touch with legislators and updating your line of credit can, and should, happen throughout the year, the remaining four preparation tips should start crossing your mind at least two months prior to the start of the next fiscal year.

"You kind of do them when you can anticipate that there will be a budget impasse or even start to be cautious on those things [during] the time period right before a budget is supposed to pass," Goughler said.

For a summary PDF of Goughler's tips from The Forbes Funds, visit www.forbesfunds.org.