2020 Marketer of the Year: Elaine Armstrong 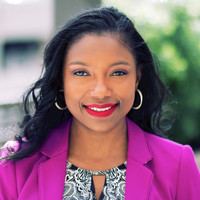 Elaine Armstrong was looking to transition into the world of public relations and marketing following her career as a television news reporter. She came across a job posting online from Goodwill of North Georgia that fit her skills and desired position. However, she was slightly hesitant because her knowledge of the organization was not extensive. For better insight, Elaine spoke with family members and mentors that were in the nonprofit space and quickly gravitated toward the organization’s mission to put people to work. Elaine decided to make the leap, and after rounds of panel interviews, she decided to make Goodwill of North Georgia her work home.

Having Elaine as public relations professional for Goodwill, the organization enjoyed a 100% increase in positive media coverage. Elaine continues to lead the nonprofit in securing top-tier media placements and positive exposure of its business and mission. Her work has resulted in numerous awards, including IABC Bronze and Golden Flame awards. Her strong leadership in marketing and communications efforts has contributed to Goodwill becoming one of Atlanta’s most recognized nonprofits. Recently, she was named by the Atlanta Business League as one of the 100 Most Influential African American Women in Atlanta, and last year she was named to PRSA Georgia’s Inaugural 40 Under 40 class.

In 14 years, Elaine has catapulted from her starting position as a public relations manager (and sole member of the marketing team), to director of public relations, and now vice president of marketing at Goodwill of North Georgia. Fully dedicated to the nonprofit’s mission, Elaine is a known champion of Goodwill’s brand, serving as the voice and face of the organization for a variety of topics and milestones.

Elaine leads her department in various marketing initiatives and innovations. Some of the most recent successes include the creation of the Goodwill employee app. Team members now have an exclusive platform where they can connect with other team members and executive leadership staff to discuss general happenings around the organization and relevant news. The app also serves as a platform for team members to be celebrated for their milestones and accomplishments.

Externally, Elaine also explores creative approaches to connecting Goodwill with the communities it serves. One example is The Good Works Show, a radio show sponsored by Goodwill on AM 920 The Answer. Elaine is a co-founder and co-host of the show, which has featured more than 300 local nonprofits since its inception. She continues to find ways to support Goodwill’s strategic goal to help place 130,000 people with jobs by 2023. Elaine has also spearheaded several rebranding efforts and the introduction of various other technology and new communication platforms.

Elaine carries the mission of Goodwill outside of the organization and exemplifies what it means to be a leader through her involvement with various board and leadership positions. Most recently, she was inducted as a board member of the Atlanta Business League and is also a member of the Leadership Atlanta Class of 2020. She continues to grow as a leader and uses her new-found knowledge and skills to lead within the organization.

Above all, Elaine is someone who consistently rises to the challenge. Some of her most exceptional work occurs in times of difficulty. She has led her team to continued growth through the great recession and two pandemics, including COVID-19. Even more significantly, Elaine built a team of strong marketing and public relations professionals from the ground up, transforming the marketing department from a one-woman show to a group of talented professionals, not once, but twice during her tenure.

Elaine deserves to be recognized as marketer of the year because of her holistic approach to furthering Goodwill’s mission. Her relentless dedication facilitates Goodwill reaching new heights and increasing awareness of the organization’s crucial workforce development efforts.

How Purpose-Driven Tech Is Blending Business and Charity