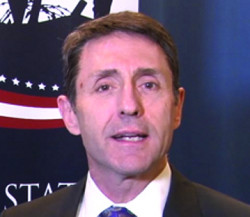 An Australian native, Matthew joined as president of the National WWI Museum and Memorial in 2013, bringing with him over 25 years of experience in organizational leadership. Under his leadership, the museum and memorial has achieved unprecedented success, breaking records for attendance, educational/community event participants, website traffic and media/social media impressions in each of his first four years as president and CEO (2014 through 2017).

Matthew’s vision significantly raised the organization’s profile nationally and internationally with increases in followers and impressions on its social media platforms, and the organization has been featured in The New York Times, Wall Street Journal, USA Today, CBS Sunday Morning, ABC News Tonight, Los Angeles Times, Time and others.

Under his leadership, the organization opened its first outdoor exhibit in the U.K. and select U.S. cities, underwent construction for an additional exhibit space and was the site for the official U.S. national observance ceremony that commemorated the centennial anniversary of the American entry to World War I.

With no federal funding, the organization has raised $21 million in three years, almost to its $25 million campaign goal. Matthew has facilitated the establishment of dozens of institutional partnerships across the world, which involved organizations from several countries, including U.K., Italy, France, Austalia and Canada.