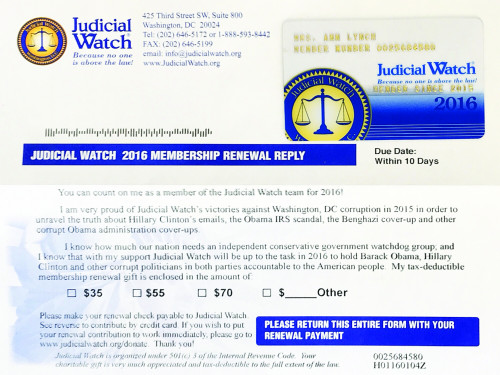 Why It Won
All of the entries are strong, well thought-out campaigns. The differentiator for Judicial Watch is its copy. Judicial Watch really leverages the core issue that motivates its donors: Judicial Oversight. The included letter is a little long, but full of benefits to donors in the form of issues Judicial Watch is working for on their behalf. The copy leverages partisan “red meat” political issues with unfettered use of emotional copy drivers to get a response. The transparent membership card is a good way to ensure the mailer gets opened, and that recipients read the letter. The end result is a mailing that’s very powerful to the target audience, and that shows in the results.

With an a total cost of just under $150,000, this appeal was able to generate over $1.2 million, which is an impressive success to say the least.