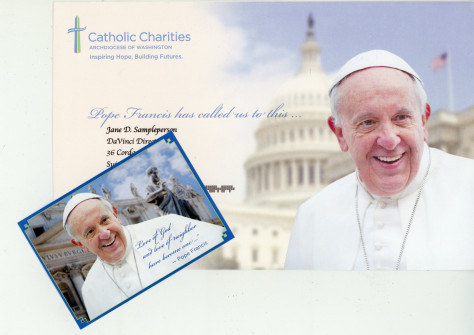 Why It Won
As endorsers go, the pope is about as good as it gets. So when Pope Francis visited Catholic Charities of the Archdiocese of Washington for a church service in 2015, the organization saw a major fundraising opportunity. The charity worked with DaVinci Direct on a follow- up mailing that would turn residual momentum from the visit into donation dollars.

The high-end package featured heavy coated stock, large full- color images and a Pope Francis prayer card, but it was the copy  that really shined. Blending the pope’s teachings with an impassioned, but concise, explanation of the organization’s mission and constituents, the copy masterfully communicated both need and impact. And donors responded in kind—the campaign exceeded its projected response rate by 32 percent, generating $27,423 for the charity.

4 Ways to Get to Know Your Organization's Audience

3 Big Opportunities That Allow Small Nonprofits to Stand Out

Should Your Nonprofit Worry About the Economy?