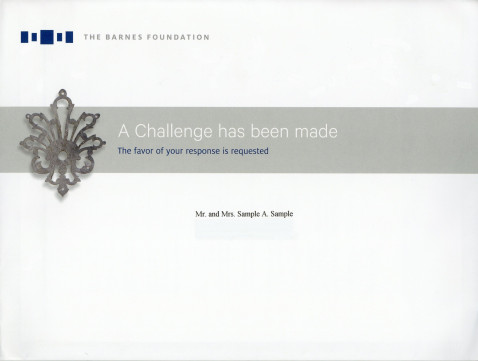 Why It Won
“A challenge has been made.” Those are the big, bold words written across the front of this Barnes Foundation upgrade appeal’s oversized envelope, practically daring donors to open the package. The mailing—inviting the foundation’s closest and most dedicated supporters to advance their memberships to a higher level—was designed inside and out to make recipients feel special. It included a personalized, hand-signed letter, invitations to a champagne reception and a challenge grant event, and a full-color brochure. The reply form featured a custom ask string and had recipients’ current membership levels lasered on. A small group of high-dollar donors received letters signed by the foundation’s board chairs.

The high-end production was a hit with donors. The campaign smashed projections, delivering a 4.58 percent response rate and a $2,031 average gift—42 percent higher than expected. The 61 gifts were just nine fewer than expected, despite mailing almost 400 fewer packages than anticipated. Net revenue totaled $100,972—38 percent higher than projected. Challenge accepted.