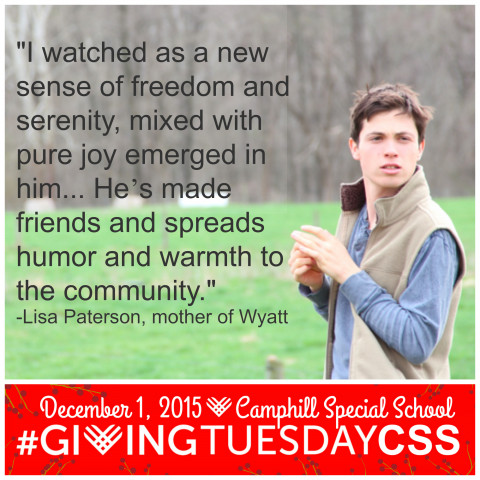 Why It Won
Cara Schmidt, development officer for Camphill Special School, wanted to build upon the school’s #GivingTuesday success in 2014 with a bigger, better 2015 campaign. The catch? She wanted to do it entirely via social media.

It’s easy to reach people on social media. It’s much harder to get them engaged. Schmidt knew that, and backed the school’s #GivingTuesday 2015 campaign with an extensive, grassroots effort to motivate and mobilize supporters. Each week leading up to the event, Schmidt shared photos of students with testimonials from parents. To expand Facebook reach and bring the campaign to more people’s News Feeds, she emailed family members and board members, encouraging them to like, share and comment on posts. She sent step-by-step instructions on how to share content, and quickly responded to  donations with an acknowledgement email that included a personalized image donors could share on their own social media accounts. Schmidt also asked five parents of  students at the school for pledged matching gifts, totaling $15,000.

All that groundwork paid off. On #GivingTuesday, the school saw 87 donations— a 31 percent increase from the prior year. Those gifts totaled $23,800, with $700 in  employer matching gifts and the $15,000 in matching gifts from parents bringing the total to just under $40,000. Camphill Special School’s only expense was $100 to boost posts on Facebook, bringing the cost to raise a dollar to a miniscule $0.0025.