Last year was big across the fundraising landscape. While the industry continues to struggle with reduced performance (efficiency) of direct mail, leading groups were tackling the hard questions—how do I truly integrate my donor data? What does the ideal donor experience really look like across channels? How do I more effectively cross-pollinate donors from one program to another (i.e., events audience to one-time giving, one-time givers to mid-tier, etc.)?

By now, the book on 2015 should be closed for most organizations, and it won’t be long before we get the scorecard on our industry’s performance last year. In the meantime, I’ve highlighted some important observations on charitable giving in 2015 and their impact on 2016.

What We Learned in 2015
The year 2015 proved to be a challenging year for most nonprofit organizations’ direct-mail programs; many experienced inconsistent performance of individual fundraising campaigns due to lower overall response rates and rising fundraising costs. Declining return on investments forced many organizations to reduce their investments in direct-mail-related fundraising programs—a move with short-term benefits, but long-term ramifications.

For the second consecutive year, the volume of individual charitable donations given through the direct-mail channel declined. As compared to 2014, the number of gifts processed last year fell 6 percent and was the lowest number of gifts over the past five years, according to a 2015 mail processing report released by Merkle Response Management Group. The report includes nearly 40 national charities and more than 19 million individual contributions. 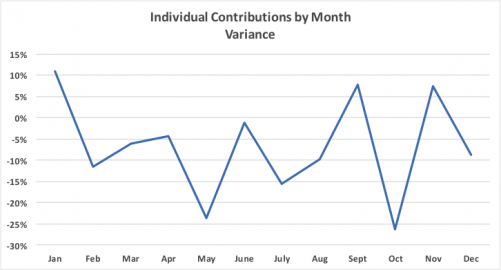 Some Key Findings in the Report
2015 got off to a great start as January contributions increased 10 percent, as compared with the previous January. Unfortunately, only in two of the remaining 11 months did the number of direct-mail contributions exceed the prior year’s monthly totals.

May and October were particularly harsh on nonprofits this year as year-over-year contributions declined 22 percent and 27 percent, respectively, and accounted for 55 percent of the overall annual decline. Three out of every four organizations experienced declining contributions in October, and every sector was impacted to some degree.

Turning our attention to 2016, in my opinion, the No. 1 priority for fundraisers is simply to evolve beyond 2015—beyond the comforts of traditional fundraising and their experiences and expertise. Our inability to do so is holding the industry back, while everything else around us continues to evolve. If we don’t embrace change, we may never realize the tremendous potential that awaits us in the very near future.

Performance Fundraising in 2016
Despite diminishing results, the use of direct mail is not dead, and contrary to some opinions, it’s not dying either. Nonprofits are continuing to leverage direct mail while focusing on the true value of channels. It’s highly probable that direct mail will continue to be a media/channel for people-based fundraising while being supported through digital efforts. While fluctuations in monthly cash flows are to be expected, direct mail remains a highly effective and predictable form of fundraising. It also continues to be one of the most successful methods for targeting, communicating and fundraising with those ages 55 and older.

In 2016, there will be greater emphasis on digital advertising—paid search, paid social and paid display/video advertising—that nicely complements existing mail, email and website programs, and that collectively offers the route to scalable digital-donor acquisition and renewal programs. It’s vital that these be paired with advanced analytics so that nonprofits can more accurately measure, attribute, report and optimize a more integrated and dynamic fundraising program.

Organizations must begin to deliver enhanced and customized experiences for their constituents. It’s time to stop talking about wanting an integrated 360-degree view of the donor, and start leveraging cross-program and cross-market opportunities to maximize a constituent’s value to the organization. To do so requires an accelerated evolution toward creating a “people-based” performance marketing solution—one that is donor-centric, targetable and measurable, and deeply rooted in data and technology.

There are a few certainties that you can count on for this year—Americans will continue their benevolent ways, the market will continue to evolve (rapidly), consumer behaviors will be impacted by economic conditions and personal experiences more than ever before, and fundraising as we know it will increase in complexity. Nonprofit boards and executives will face the difficult challenge of balancing short-term revenue requirements with a spin-up (investment) in new organization capabilities and competencies.

If you do nothing else this year, decide to do something differently and challenge the status quo. Don’t accept a “business as usual” attitude this year. Don’t be hostage to a campaign-based budget and pro forma. Take calculated risks—as many as you can, and learn and grow from every experience. Don’t be afraid to shake things up—to try a lot of different things, new things. Focus almost entirely on those things that truly matter most to you and your organization.

Greg Fox is vice president of nonprofit vertical strategy at Merkle. He joined the company in 2000 to establish a data-driven, strategic fundraising agency group. Fox is a 30-year veteran of direct response fundraising, with expertise in developing innovative fundraising marketing strategies and solutions. He has helped raise hundreds of millions of dollars for many of the largest and most respected fundraising brands in America, and while he has broad-based fundraising experience, he is highly regarded as a leader in the national health-charity sector. Prior to joining Merkle, Fox was a founding partner in TheraCom, a leading provider of full-service specialty pharmacy solutions and marketing strategies that served the healthcare and charitable industries. He also served as vice president of direct response fundraising at the National Cystic Fibrosis Foundation, where he started his career and created the organization’s first national direct response program. Fox is an industry thought-leader, frequent speaker at industry conferences and an active participant in the DMA nonprofit federation. He graduated from Virginia Commonwealth University in Richmond, Va.

The Envelope Teaser: Should You Use One in Your Next Fundraising Appeal?

10 Things I Learned From 30 Years in Sustainer Giving, Part 1