The American Battlefield Trust received two Gold MAXI Awards in the Direct Mail Nonprofit Special Appeal Category at the 40th Annual Direct Marketing Association of Washington MAXI Awards Ceremony, held July 10, 2019. The success of their two entries proved that the recent rebranding of the American Battlefield Trust, previously the Civil War Trust, had little or no impact on their fundraising efforts. 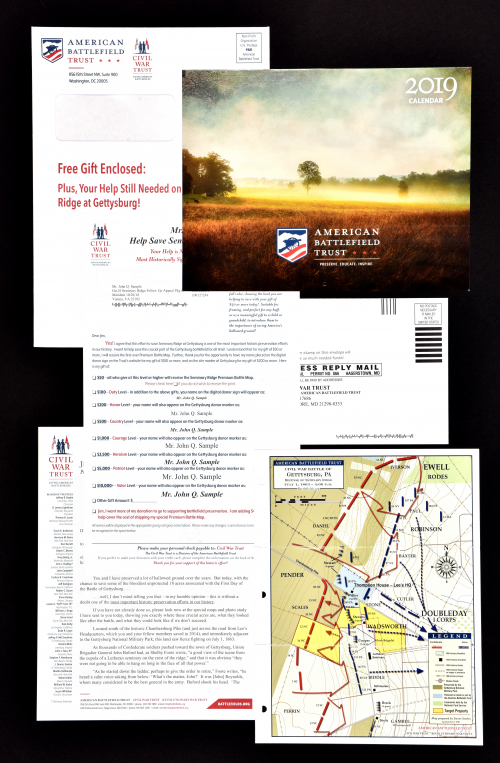 The American Battlefield Trust first became involved with the Fredericksburg Battlefield in 2006 (then known as the Civil War Trust) when they created an appeal to save the battlefield. The current challenge was to continue to preserve this historic hallowed battleground; consequently, the now American Battlefield Trust needed to continue to raise money long after the plot of land had been protected and under a new name! The Fredericksburg Battlefield Debt Appeal set out to give their aging appeal a facelift. Starting with the carrier, which showed a full-color, specially commissioned rendering of what the historic land would look like had the Trust not stepped in, while repeating throughout the package the theme “a nightmare averted.” Results were an impressive 8% response rate and a $92 average gift, awarding this historic entry a Gold MAXI!

This second award winning effort, the 2018 Seminary Ridge Follow-Up Appeal, focused on completing the battle to save the Ridge at Gettysburg.  The Trust featured their annual upfront calendar in a follow-up mailing and offered donors the chance to have their names appear on a digital wall or an onsite signpost. Donors could also use a combination of gifts from the initial mailing and this follow-up to qualify. The question was, would back-to-back efforts to save the same battlefield work as a rebranding tool — going from Civil War Trust to American Battlefield Trust?  Well, the answer was an emphatic YES!  With nearly a 10% response rate, an average gift 45% higher than the standard appeals, it brought in $1.2 million and a 537% return on investment!

You can expect to see more outstanding gold-winning campaigns at the 2020 MAXI Awards Ceremony to be held on Wednesday, July 15 at the Gaylord Hotel & Convention Center, National Harbor, Maryland.